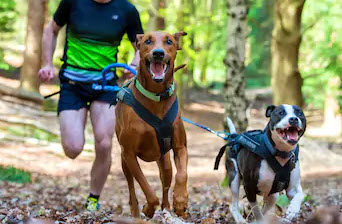 Having listened to concerns, we now accept entries from runners with a dog. Our policy is that this only applies to runners who regularly run with their dog and that the runner complies with the guidance issued by Canicross. The guidance includes using an appropriate harness and lead.

Dogs must be on a lead attached to a well-fitted running harness worn by the dog at all times while competing in a race. Leads may be held in the hand or attached to a competitor’s waist belt.

The use during a race of mobile phones, personal stereos, MP3 players or any similar device that impairs concentration or the ability to hear marshals or other runners is strictly forbidden. Anyone using such a device shall be liable to be eliminated from the race.

If any dog shall foul the ground while competing in a race, the competitor shall immediately remove the fouling, in accordance with the venue’s policies, from any area where it is likely to be trodden on before continuing with the race. Where required to completely remove fouling, competitors shall pick it up, and must carry it to and dispose of it responsibly in the receptacles provided. In such cases competitors must carry with them whilst racing a means of removing dog fouling.

Dogs must compete in a flat buckle or snap collar, which must bear the name and address of the dog’s owner inscribed on the collar or on a tag or plate attached to it.

Harnesses worn by dogs when taking part in a race must be well-fitted, must not constrict breathing, and must have the lead attachment on the upper back. Harnesses designed to deter dogs from pulling must not be used.

Competitors may not wear footwear with spikes, hard studs or similar projections on the soles which could injure the dog.

Run with Your dog!

Want to find out more? Send us an email